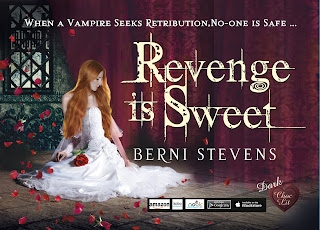 Reviews can make or break a book, or a film, or a TV series – well actually they can break anything.  Anything that’s ‘out there’ in the public arena anyway.


I remember doing a photo shoot  some years ago with Ben Elton (sorry to name drop), and he was devastated at some vitriolic reviews that had appeared in national newspapers the morning after his latest play’s opening night.


The answer is they really don’t. Half of them had probably not even watched all of  the play. They got the tickets free, so they didn’t even pay either.  But Ben Elton’s a name, he’s famous, and some journalists clearly thought they’d look clever and cutting edge by criticising him. They didn’t.


For some reason anyone who puts their work out in the public arena is considered fair game. It’s far worse these days of course, with social media. At least a newspaper ends up wrapped around fish and chips, but reviews on social media are around forever.


I’ve lost count of the number of authors who have been devastated by nasty – and usually unfounded – reviews. The best advice is, ‘Don’t read them.’ Easy to say, but not so easy to do.  As writers we are advised not to respond either, which is also difficult, when our natural reaction is to defend our work.


Constructive criticism is different of course, and although it can seem harsh sometimes, it can occasionally be helpful. We’re all guilty of being ‘too close’ to our books, so a fresh pair of eyes can often point out something not working, that we haven’t noticed. (This is also why we need our lovely painstaking editors)!


As a book cover designer with many years experience, I’m used to people dismissing something I’ve spent a long time working on, with a, ‘I hate the  girl’s nose,’ or ‘I don’t like the sky.’  For more years than I care to count, I presented the cover design meetings at a large UK publishing house, and I’ve seen strong confident designers reduced to tears by crass comments when they’ve been working for weeks to come up with a ground-breaking design. Nobody cares how long they’ve worked on something, or how long they agonised over the approach, the colours, the images. Most designers I know are dedicated and incredibly hard working, so trashing their work is a bit like sticking a knife in them. It hurts. And it does feel personal.


But back to book reviews.  As I said before, it’s always easy to criticise something that’s out there and wide open to criticism. A sitting duck. Anyone can criticise; it isn’t particularly clever. I write reviews for the Dracula Society, it’s easy. It takes so much more nouse to write and complete a book or short story, and even more nouse to actually submit it to a publisher or agent. Wrenching your ‘paper baby’ from the printer and letting another person read it, is incredibly hard.   Like any baby, your first instinct is to protect it!


The book contains part of you, a little piece of your soul, and a lot of your personality. It is you. An editor friend of mine advised me when I was about to send my first novel around. ‘Deep breaths,’ she said. ‘Send it off and then pour yourself a glass of wine. And remember to breathe.’ (Oh yes, breathing …)


I wonder whether the average person in the street has any idea just how long it takes to write a book. I suspect they couldn’t even hazard a guess. Although sometimes I wonder whether the nastier reviews are from frustrated, rejected writers. If so, I sympathise, because we’ve all been there and will no doubt be there again at some point. All I would say is, never give up. Keep writing. And reading. You will be published some day if you persevere.


An author friend of mine was once given only one star because her book cover was (and I quote) ‘too pink.’ Oh for heaven’s sake.  There was no mention of the story. But the pink cover was me – I designed it  … so … my bad. Blame me, not the author. It wasn’t even a girly pink either, but an eye-stinging fluorescent pink! (I bet a lot of those reviewers wouldn’t even be able to spell fluorescent.)


One  person  said that clearly I had set out to write a ’50 Shades with vampires.’ Interesting. I’ve never read any of the 50 Shades series, never seen the film and have no desire to. None of my books contain S&M or bondage or non-consensual sex in any way shape or form – or costume. But I have to admit it’s a brilliant marketing ploy, and I thank the reviewer wholeheartedly for that. I doubt the marketing department would have thought of it. It could sell books!  The reviewer should get a job in advertising. It’s the kind of promotional quote any poster designer would leap on with shrieks of glee. Although I think the 50 Shades fans could  be a tad disappointed.


Another reviewer was incensed because my heroine planned her wedding. Well to be fair, she didn’t plan the wedding, just her outfit. The hero planned everything else. The reviewer mentioned ‘kick-ass heroines’ and said they would never long for a wedding anyway – and then mentioned Buffy. I'm proud to say I'm one of the biggest Buffy fans ever. I’ve watched all seven series so many times, I know the scripts off by heart. I could probably go on Mastermind answering questions about Buffy. (Hmmm, OK ... well ... maybe not that good!) The highlight of my summer this year was meeting Juliet Landau (Dru in Buffy) – what a lovely person she is too.  Aside from the actual Buffy cast, Joss Whedon and Marti Noxon are my heroes, I adore them. 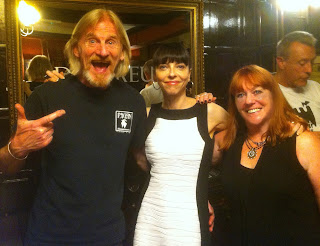 My husband Bob, Juliet Landau and me.

The most exciting design job I’ve been commissioned to date, was to design the inside pages of The Quotable Slayer, I had the best time. Many hours spent with CDs of the actors from the Buffyverse. (Bliss).
But  Buffy is never too busy ‘kicking ass’ or being too  strong  a woman to fall in love or (perish the thought)  think about a wedding.  Cast your minds back to Series 1 when as a vulnerable sixteen-year-old she’s totally infatuated with Angel. In Series 2, she’s often in tears over Angel, and by the end of the series, she leaves town after . . . well no spoilers in case there’s someone somewhere who’s never seen the show. One hilarious episode in series 4 (Something Blue) has Buffy falling in love with Spike (well who wouldn’t?) and – oh horrors – she's planning a wedding!  She might have been under one of Willow’s spells, but you get my point. Relationships make characters seem more real somehow. We’re all vulnerable when we fall in love. That’s the main reason I made my characters’ love lives so intense. Will has been a powerful vampire for over three hundred years, so for him to suddenly be made vulnerable because of his love for Ellie would be terrifying for him.


There’s a fabulous scene in Dracula, where the three vampire sisters accuse Dracula of never having loved. He replies he has loved and they are proof of it.  It’s a scene I never forgot from the very first time I read the book.


Romance is everywhere whether you like it or not. Remember the last scene in True Blood? It shows the ‘kick-ass’ heroine Sookie Stackhouse, barefoot and pregnant – and surrounded by all her other children.  So romance and marriage caught up with her too in the end. And even Anita Blake (vampire hunter) is  now engaged – albeit to several different men at the same time! But let’s not forget, I do write for a romance publisher …


Having said all of that I’m really very fortunate to have had some absolutely stonking good reviews, many of them five stars. These reviews are what it’s all about. These are the people we’re all writing for. I love to chat with my favourite book bloggers and reviewers on Twitter, because they so often make my day. To hear them speak about Will and Ellie as if they’re real people is always wonderful. Will and Ellie are real to me of course, and they shout – loudly – in order to be heard. (At odd times too, often in the middle of the night – but I suppose they are vampires so maybe it’s their lunchtime ?) Oh – and when The Bookseller magazine gave me a lovely review for Dance Until Dawn, I was over the moon.


One of my fave bloggers asked when the third book will be out. ‘I’m over halfway through,’ I replied. But because she asked so nicely, I’m stopping this blog post now and going off to write some more … 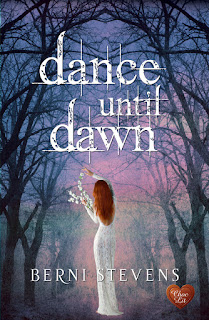 ‘A fun vampire tale with a nice take
on being a 21st-century vampire.
Good fun.’ 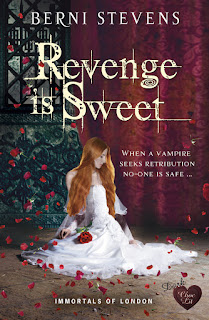 'Berni did it again ...
created another lush and sexy
vampire novel.
This sequel to
Dance Until Dawn
doesn't let you down ...'
Laura P.
(Amazon UK review)
Posted by Berni Stevens at 09:45