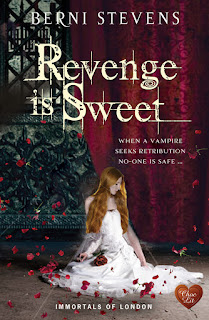 Here it is . . . the final approved cover for Revenge is Sweet. Complete with a new series title (which I love) thought up by the clever people at Choc Lit UK. Immortals of London. It's perfect.

Originally the series was called, The London Vampire Chronicles. But there are a lot of vampire 'chronicles' out there, not least the very famous ones written by the amazing Anne Rice. Another problem would have been the fact that the third book in the series is about a werewolf! So 'immortals' is much better.

Revenge is Sweet is available to pre-order on Amazon, and the eBook will be released across all digital platforms on the 12th July 2016. I'm very excited to be able to add to Will's and Ellie's story at last. I actually wrote this book not long after Fledgling – which morphed into Dance Until Dawn – so it's been a while getting to this point. For the romantics among you, there's a wedding. Ever wondered when and where a Master vampire might marry in London? Revenge is Sweet will share that knowledge with you. And what would the 'bride-to-be' wear? Well, you'll have to buy the book to find out!


Hell hath no fury like a vampire seeking revenge …


Life hasn’t been exactly normal for Ellie since she became a vampire. Although joining the legion of the undead was always going to take some getting used to, even if you are the partner of Will Austen, the Elder of London.


But when Daniel, a fifteen year old fledgling vampire, unexpectedly turns up at Ellie’s and Will’s Highgate home, things start getting very strange – and more than a little scary.


Events take a devastating turn as a mystery troublemaker leaves behind a trail of carnage – and it soon becomes clear they will stop at nothing to get the Elder’s attention, even if it involves hurting the person he cherishes most .


When it comes to Ellie, Will Austen is the wrong vampire to mess with. 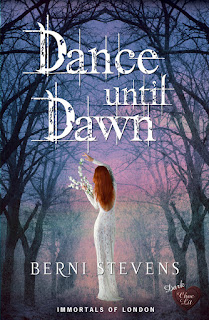 "I reached out to Elinor, but she turned from me and ran away like the wind. I knew Thomas could not be far away, as the kill of the girl had been a fresh one. My one thought was for Elinor’s safety and I immediately ran after her, the cold fingers of dread clutching my heart.


When I emerged from the mausoleum, she had already disappeared from sight. Few can rival me for speed, but I think her anger spurred her on. Feeling more fear than I have ever experienced before in my long existence, I ran in the direction I knew she had taken.


Suddenly I heard her scream out in pain, and doubled my speed. I would tear her assailant limb from limb if he had hurt her. I reached the place where she had been – just mere seconds before – but found no-one. The peaceful scene mocked me, as I looked frantically around. How could she have disappeared so quickly?"

From Revenge is Sweet ©Berni Stevens