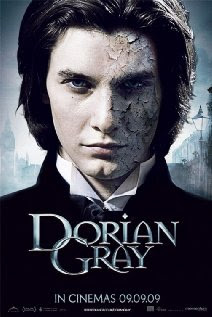 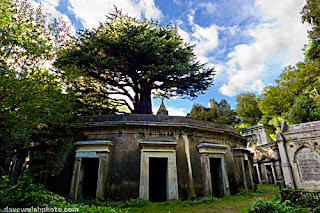 The Circle of Lebanon, Highgate Cemetery, London.
Over the Christmas break, I managed to catch up with the 2009 movie, Dorian Gray, which is one of many films I've always meant to see, but just never got around to. I read the book years ago, and it's always amused me that the old adage 'portrait in the attic' is still often used when a person doesn't seem to age. (Unless they're a vampire of course!)
Ben Barnes ( Prince Caspian in The Voyage of the Dawn Treader) makes a suitably gorgeous Dorian Gray, although if memory serves, Oscar Wilde's Dorian was blonde. The film script differs quite a lot from the book, but then I suppose film scripts always do. (For instance, I have yet to see a remake of Dracula which bears more than a passing resemblance to Stoker's original novel.) The story is over dramatised and many liberties have been taken with Wilde's characters, but it didn't matter too much. (I'm not as wedded to Dorian Gray as I am to Dracula!)
Colin Firth's Henry Wotton was an interesting departure from his usual rom-com roles, and it made a change to see him as a swaggering, debauched lush! Also interesting when he displayed alternate values where his own daughter was concerned. (How like life!)
I loved the scene at Highgate Cemetery – but then of course I would – showing the wonderfully gothic Circle of Lebanon, and the beautiful Egyptian Walk. There's a reason I chose Circle of Lebanon for my Twitter name. I just love the place.
I thought the aging of the portrait overdone, with its maggots squirming out of painted eyeballs. Truly over the top, cinematic nonsense in my humble opinion. Just having the portrait age would have been enough ... really it would.
But all in all, I enjoyed the film. It was beautifully shot, atmospheric, and well-directed. Well worth catching up with, albeit two years late!
Happy New Year!
Posted by Berni Stevens at 08:07