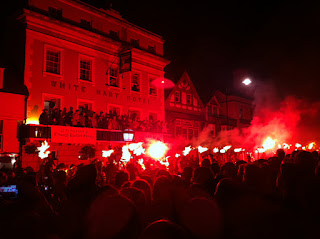 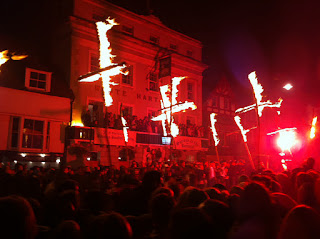 OK it's a Brit thing, we love a bit of paganism - and as Buffy says, 'Fire . . . pretty!'
Guido Fawkes, born 13 April 1570 and dispatched in a very unpleasant manner on 31 January 1606 – (hung, drawn and quartered to be precise) for his failed attempt to blow up Parliament in 1605 – is the reason for Guy Fawkes night or Bonfire night as it's more commonly known. Fawkes and his associates belonged to a group of English Catholics who attempted to start a Catholic rebellion in Protestant England. It's rumoured that Fawkes broke down after being tortured, and actually jumped from the scaffold and broke his neck, thereby escaping being alive for the actual quartering.
Who could blame him for that?
Lewes, the county town of East Sussex, in the UK, is steeped in history. In 1557, it was the execution site of seventeen Protestant martyrs who were burned at the stake in front of the Star Inn (now the Town Hall.) Put to death by the Catholic Church, they have always been referred to as The Lewes Martyrs. Over the years, Catholicism and the Gunpowder Plot have merged in the town, and for the last two hundred years, Lewes has celebrated both on November 5th.
There are a lot of bonfire societies in the Lewes area, and the flaming torch procession on Bonfire Night has grown considerably over the years, with each society having their own theme. There are Zulus, Native Americans, pirates, smugglers and Tudors – to name a few. Flaming barrels of tar are pushed down the High Street from the top of the hill to the War Memorial at the foot. Effigies of politicians and anyone currently newsworthy are featured in the procession, as is Guy Fawkes himself – and a Pope (for obvious reasons!) The whole town is closed off to outside traffic from 5pm and not opened again until midnight. After the procession, the various Societies make their way to their own bonfires where effigies are burned and the fantastic fireworks begin. (Imagine The Wicker Man with fireworks!)
There's something pagan and compelling about Lewes on Bonfire Night. Lewes is my husband's home town so we've often attended the event and last night's celebrations lived up to every other year we've been to. The procession is even bigger and better . . . and the atmosphere is electric. Lewes – you rock!
Posted by Berni Stevens at 05:59