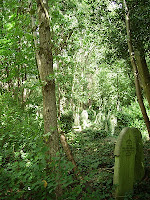 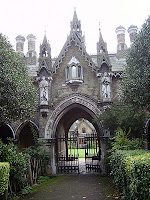 One sunny Sunday at the beginning of September, we went to Highgate to take photos and video footage of the gothic goodness in the Swains Lane area. My protagonist in Fledgling, the scrumptious vampire Will, owns a Georgian town house in Highgate - well he would wouldn't he? If one has eternal life it should be comfortable at least.
The famous West Cemetery's gates were firmly closed and locked of course, because only guided tours at specified times are permitted now. The reason for this (apparently) is health and safety, because of the many catacombs and mausoleums, the ground is weakened in many places and in danger of collapse. So should visitors be allowed to wander around on their own, they could actually fall some thirty or forty feet down ... and er ... not be able to climb out again! So it's designated paths only for visitors, with an official guide, who is usually one of the 'Friends of Highgate Cemetery.'
Actually we wouldn't have been exactly welcomed anyway, armed with camcorder and cameras as we were. The entrance fee leaps up if cameras are spotted, which I think is grossly unfair. The Cemetery is a part of English Heritage and therefore I would have thought belongs to the people. There is no extra charge for cameras at the Tower of London after all.
We chose not to pay to visit the West Cemetery itself, because we needed to get certain shots whilst the light held. When we arrived sunlight shone its rays through the trees and dappled on ivy and tombstones, it looked perfect. Yes I know vampires don't go out in sunshine - not in my books anyway - but dappled sunshine can be made colder to look like moonlight, so there's method in our madness.
The next stop was Parliament Hill on Hampstead Heath, the place where the heroine, Elinor, takes her first walk as a vampire. She stares down at the view of London, thinking how everything looks the same but how nothing will ever be the same again. Something we probably all do after a massive change in our lives.
So, we have lots of video footage and stills, the copy has been written and everything has gone to the video producer.
Now I wait with bated breath and huge excitement for the finished product. You will all be the first to see it :)
Posted by Berni Stevens at 02:47